Within the past few years, there has been a resurgence of conversations, panels, and initiatives focused towards diversity and everything that falls under that term’s umbrella.

“Diversity” is a term that, in the context of organizations and institutions, covers a number of issues such as workplace personnel and leadership, cultivating an inclusive culture, and searching for talent from underrepresented demographic pools. This is equally important in diversity in art. 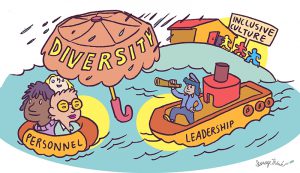 We’ll focus on this in terms of graphic recording and media. When we talk about diversity in art, a number of questions may arise in terms of WHO is being shown, HOW they are being shown, and WHAT is the impact of those depictions. First, the WHO query: When you watch a TV show, look at ads, play videos, read comics, and so forth, a good thing to think about is the face of the avatar- Essentially, who is being used as your point of entry for this particular piece of media? Can you relate to them? Does their story reflect something that you experience? How inclusive or exclusive is that choice? Example: there are a lot of articles out about the importance of representation in the casting of people of color, LGBTQ actors, and women in lead roles in Hollywood movies, since there is a still a dearth of stories that show experiences and perspective outside of a very narrow lens.

Can a genderqueer black woman be a steampunk fantasy hero? Can an Asian man be the smoking hot lead in a romantic piece?

The answer to both questions is “DUH”, and including those faces can help us move beyond the mental restraints that come with preconceived notions of who can be what.

The next question is HOW: So, there is an interesting history of cartooning (which runs parallel to the visual language of graphic recording), which has (because of a historical context, erasure, and systemic discrimination) a codex of icons in the history of cartoons that steer towards a white, heteronormative default. Obviously, that slice of humanity only represents a fraction of the US population (and a REALLY small portion of the worldwide population), but there is such a rich variety of ways to depict this particular group. The visual vocabulary for minorities and women (cis and trans), however, is still a work in progress and there’s a current battle to veer away from harmful, stereotypical imagery. It’s a lofty task, but the people doing that work are incredibly passionate about filling in the gaps. Lastly, WHAT is the impact: When I’m doing graphic recording work, I want to make sure that the world I create is one that has room for everyone. It’s important to use media, including graphic recording, to give us all a broader view of the world that we live in, and the people in it. Living in our diverse world should offer us different forms of art.